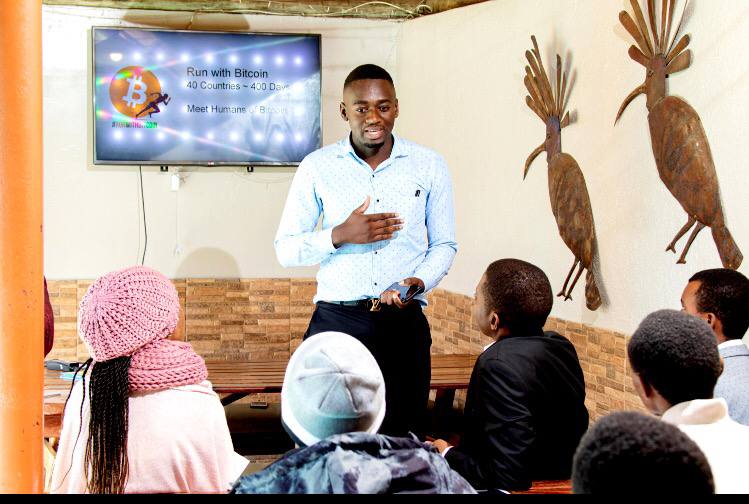 On the 11th of June 2022, we had our first Bitcoin only meetup in Bulawayo to discuss Bitcoin adoption in order to raise awareness. The meetup run from 11am to 4pm.

The event was attended by 20 people from Bulawayo, the second largest city in Zimbabwe. The guest of honor was Paco (Run with Bitcoin), all the way from India. Paco’s mission is to travel around the world using only bitcoin.

The meetup was sponsored by Bitcoin for Fairness (BFF) as part of its bitcoin awareness initiative in Africa. BFF is a non-profit initiative raising knowledge and understanding of bitcoin for people in emerging countries and for disadvantaged people.

BFF was founded by Anita Posch, a Bitcoin advocate, educator, podcaster, and the author of (L)earn Bitcoin – Become Financially Sovryn.

The first speaker was Alexandria who talked about the main characteristics of bitcoin, which include divisibility, portability, and durability.

He noted that because of bitcoin portability, it is easy to move its value across distances within a short period of time. Bitcoin is recognised at the most portable currency in the world.

On bitcoin durability, he observed that the individual units of bitcoin don’t differ significantly from each other, which allows for fast and verifiable transactions.

I was the second speaker. I introduced the concept of bitcoin by first describing the rampant inflation in Zimbabwe at 700% (still going up and now highest in the world).

Bitcoin is the only solutions to Zimbabwe’s hyperinflation. Bitcoin is considered a digital store of value in an increasingly digital world.

Paco took attendees on a journey of the history of money. All the way from barter trade, gold standard, fiat currency to bitcoin.

On fiat currency, he went into great depth to explain how central banks create money out of thin air, eventually leading to loss of people’s savings, decimating the middle class and creating countless negative effects in the economy.

He then compared fiat currency to bitcoin, which has only 21 million hard cap. This means, once all 21 million bitcoins are mined, the demand will remain high while the supply is limited. Factors giving bitcoin value include supply and demand.

Zimbabwe is ripe for bitcoin adoption. Zimbabweans have been using fiat digital currency on mobile phone for years. Therefore, we expect that transitioning to bitcoin won’t be a challenge from technical point of view. For instance, Ecocash is mobile wallet that uses phone number as a public key, explaining bitcoin wallet to Zimbabweans using Ecocash analogy makes it easier.

What is needed now is public bitcoin education. This is the reason why Bitcoin for Fairness organised and sponsored a third Bitcoin meetup in Gweru that took place on July 9th, 2022. Gweru is the third largest city in Zimbabwe.

You can see other BFF sponsored bitcoin educational events here.

View posts by Langa Chiruka
Langa Chiruka is a Bulawayo, Zimbabwe-based internet entrepreneur, investor, and bitcoin holder. He is a founder of investment company The Prestige Group Network Holding Company. Opinions expressed are entirely his own and do not necessarily reflect those of Bitcoin for Fairness (BFF).