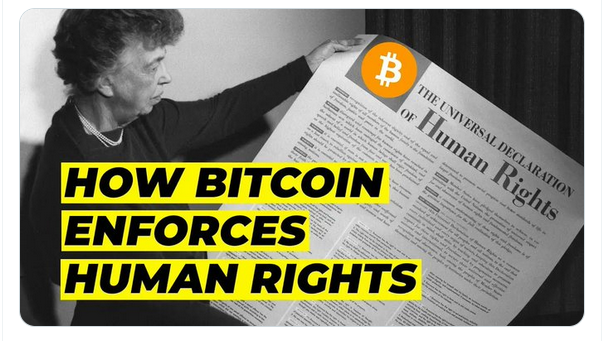 In the article, Posch shows how Bitcoin directly enforces seven of the 30 human rights listed on the Universal Declaration of Human Rights by the United Nations. The article shows the correlations between authoritarianism, corruption, inflation and oppression and how financial exclusion is used as an instrument to keep two billions worldwide from using a financial service.

Funding the opposition in Zimbabwe? Supporting a gay rights group in Saudi Arabia? Protesting against China in Hong Kong? Donating toward Ukrainian refugees? Then you’re sharing your opinion with the world through your financial transactions. If you can’t send money to an abortion clinic in the U.S. for fear of being prosecuted, then your freedom of speech has been taken away […]. Bitcoin transactions are uncensorable. Used the right way, Bitcoin gives you enough privacy to express your opinion (I’m not talking about any privacy it may grant for committing crimes).

Freedom of speech goes hand in hand with freedom of association. If you can’t express your political opinion, if you can’t meet with your fellow demonstrators or freedom fighters because of financial surveillance, then you’re stripped from political power. If your activism endangers the authoritarian powers, then they cut you off from your bank account.

This happened in Nigeria during the EndSARS movement which started in October 2020. The demonstrations against police brutality were supported by the Nigerian Feminist Coalition. They collected donations via their bank account and gave food, drinks and other needed support to the demonstrators, but not for long. The country’s central bank cut off their bank account. But the women remembered Bitcoin, the technology that works without banks. Tech savvy as they were, they set up a BTCPay Server instance and started collecting donations in bitcoin from all over the world.

Anita Posch is BFF founder, a Bitcoin advocate, educator, podcaster, and the author of (L)earn Bitcoin – Become Financially Sovereign. BFF is a non-profit initiative raising knowledge and understanding of Bitcoin for people in emerging countries and for disadvantaged people.

Here is the full article and here is the audio version of the article.