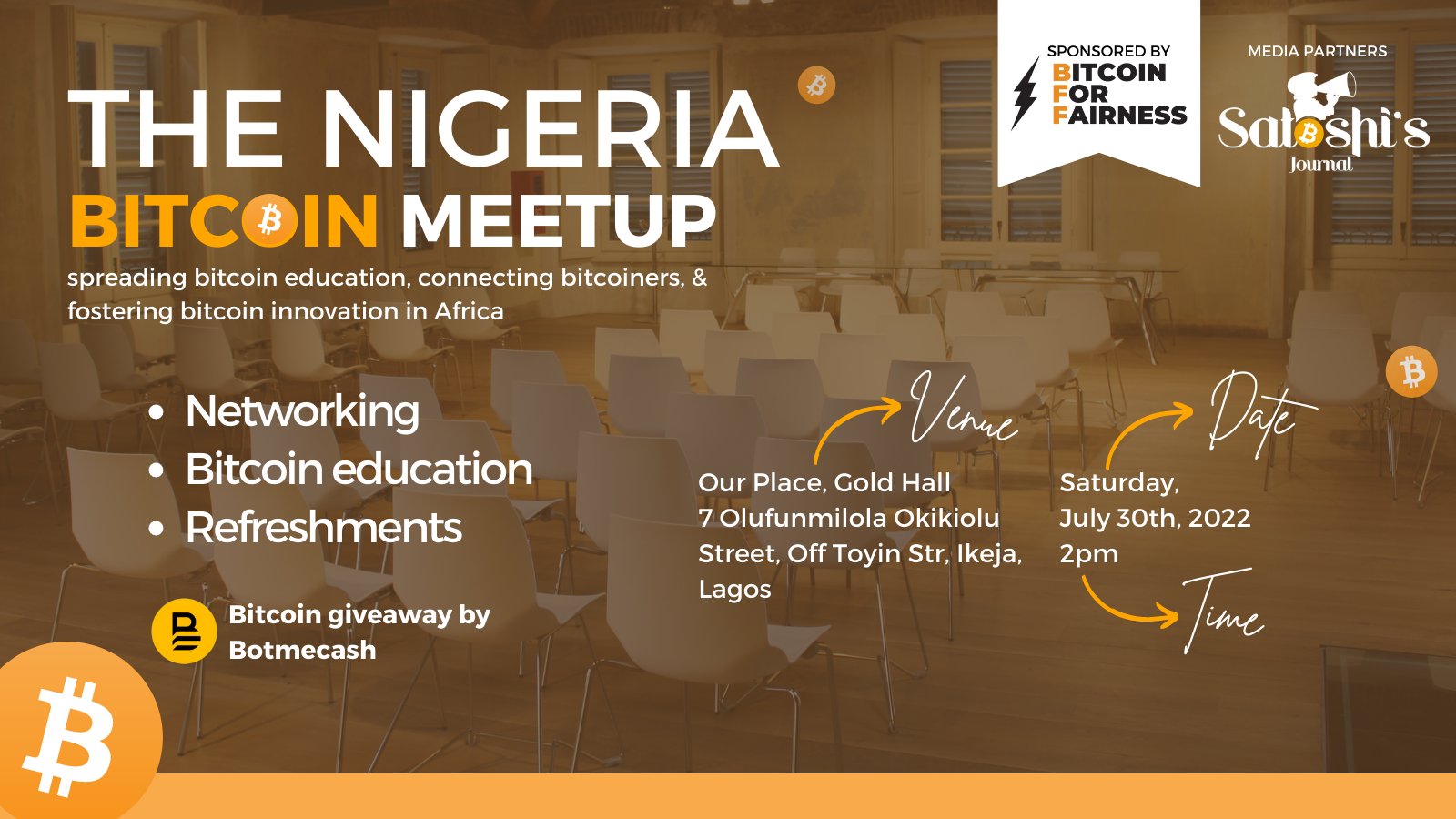 Bitcoin for Fairness (BFF) sponsored the Nigeria Bitcoin Meetup in Lagos, which took place on July 30, 2022 at Our Place in Ikeja. BFF is a non-profit initiative raising knowledge and understanding of bitcoin for people in emerging countries and for disadvantaged people.

The Lagos Bitcoin Meetup was attended by about 45 people.

There were two sessions called Bitcoiners Chat. The first Bitcoiner Chat was taken by Mary Imasuen, the main organiser of the event, who spoke about “Expanding Your World with Bitcoin”. The presentation looked at the different ways you can actively contribute to the bitcoin ecosystem with your technical and non-technical skills. The goal of the presentation was to encourage people to think outside of the box when it comes to bitcoin and to show them that there’s more to bitcoin than it being a store of value and a means of exchange. She shared the different bitcoin platforms you can use for this.

The second Bitcoiner Chat session was taken by Paco de la India (Run with Bitcoin). Paco is currently traveling around the world using bitcoin. During his session, he spoke about his travels and showed that there is an increasing bitcoin adoption in the world.

There was also bitcoin games. A representative from Paxful, Ayobami Atolagbe, hosted a bitcoin trivia using the platform called Kahoots and he gave prizes to the winners. Everyone had so much fun and learned about bitcoin through the trivia.

There were 2 rounds of networking sessions during the meetup. Participants went around the room and engaged with other participants. During the networking session, some participants asked about how to open their own wallets and inquired about the bitcoin platforms they can use to earn bitcoin (e.g bitcoin games, content creation platforms like Stacker News, etc). Some even brainstormed about how they can bring the information they learned at the meetup to their respective areas.

There were also satoshi giveaways and refreshments for the participants.

Bitcoin for Fairness was founded by Anita Posch, a Bitcoin advocate, educator, podcaster, and the author of (L)earn Bitcoin – Become Financially Sovryn.

You can see other BFF sponsored Bitcoin educational events in Africa here.

Thanks to BFF main sponsors: The Human Rights Foundation, Paxful, Ledn, OkCoin and all individual sponsors.

Below are some of the photos taken at the event.